Melee Hutton is a working actor in theatre, TV and film, as well as an acting teacher and on set acting coach. She trained at the Royal Conservatoire of Scotland and met David Rotenberg during her MFA studies in Toronto. As well as acting training, David also trained Melee as a teacher. She holds both an MFA and a Graduate Certificate in the Teaching of Acting from York University. Currently, Melee is also a full-time professor at Sheridan College, Canada.

Her most recent on- set coaching includes BEANS (Canadian Screen Award for Best Feature 2021), all seasons of Anne with an E (Netflix/CBC), Shazam (Warner Brothers) , The Grizzlies (TIFF) and most recently POLARIS an all-female, dystopian thriller feature set in the Yukon. Melee is a member of ACTRA, Canadian Actors Equity, British Actors Equity and the National Alliance of Acting Teachers, USA. 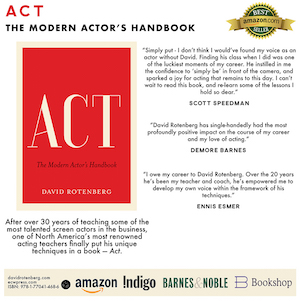